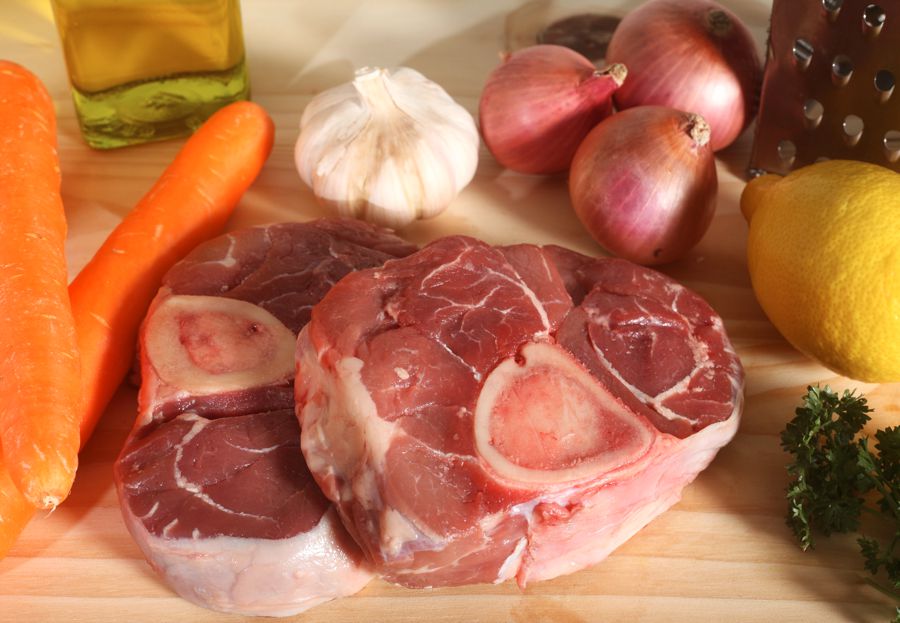 Quite literally known as “hollow bones” or “bones with holes”, Osso Bucco is actually slow-braised veal or beef, which would certainly sound more accurate and appetising, yet it’s these bones which are actually not hollow at all but enclosing a delicious, rich marrow, which is the dishes’ greatest fame. Osso Bucco cuts from beef, are a relatively cheaper cut of meat than veal, although very flavourful and tender when braised.

The cut of beef is actually around an inch and a half thick portion of from shank. This area of the animal, the hind shank, produces a ring of meat from the shin that is the most tender and sweetest on the entire animal. There is an ample portion of tough meat that surrounds a flat portion of bone, which has succulent, rich marrow in its centre. During the cooking process, this bone marrow melts into the sauce, producing a bone with a hole in the centre, hence the name, Osso Bucco. As the shanks tend to fall apart during cooking, it’s essential to leave the skin on the meat, although the cream consistency does add a delectable addition to the flavour of the final, cooked dish.

The first stage of cooking is to brown it well in butter, after coating it in flour, to caramelise and seal the flavours into the meat. Some recipes suggest browning in lard or oil, purely personal preference. White wine is an essential additive to any Osso Bucco recipe, however, you can reduce the wine entirely or leave some of it to produce a zingy, lighter sauce.

A Milanese recipe suggests braising cross-cut beef or veal shanks with broth or stock, white wine and vegetables. It is then served with risotto and garnished with gremolata. The dish’s main ingredient, the shin or shank, may often be quite a tough meat, braising it with liquids will make it tender. Be sure to choose cuts that are well-marbled and not cut too thick.