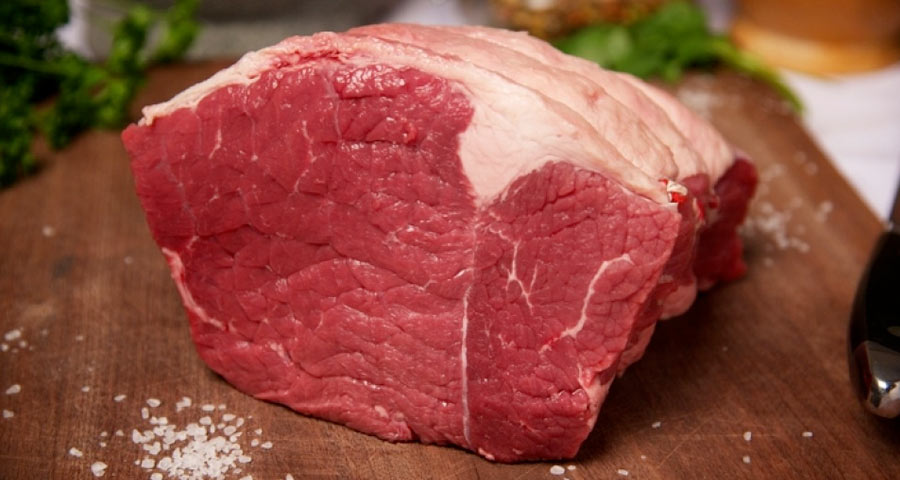 Taken from the hindquarter, outside thigh of the cattle, the Silverside is a large, boneless joint of meat, very lean with a wide grained texture and very little marbling of fat. Sometimes known as the bottom round joint, it takes its name from the silvery coloured, shiny membrane that covers its internal surface. From hardworking muscles, Silverside beef is a very versatile, economical choice of meat. Although it does make a good, inexpensive roast, it’s perhaps better known as a slow cooked pot roast. Steaks taken from the Silverside joint produce tasty, excellent braising steaks.

Silverside generally comes in two forms- either rolled up and tied which is better suited to being pot roasted to make corned beef, or in a tubular shaped piece (sometimes known as a Pope’s Eye or Salmon cut) which is nicer when slow roasted.

Silverside is a traditional joint for salting and preparing as a boiling joint for salt beef, however, these days this popular joint is more often prepared as an unsalted joint for slow roasting. The flavour is enhanced with regular basting while the joint is cooking.

Silverside is an inexpensive joint of meat, and although it’s a lean cut, its best cooked using a low heat for a greater length of time, to tenderise the tough muscle.

Pot roasting – Place the joint of beef into a tin and then place in a hot over for around 20 mins to brown. Reduce the heat to a medium temperature, adding thyme, garlic and onions around the joint with a small amount of water or stock. Cover the pan with tinfoil and cook for around 2 hours, basting the joint frequently, and adding additional water if required.

Corned meat – Rinse the silverside joint well in cold water to remove any brine then place into a large pot. Cover the joint with cold water until completely submerged. Place over a low heat and bring to the boil, adding bay leaves, cloves, brown sugar and onions as required. Don’t let the water boil or the resulting meat will be tough and stringy. Cook until the meat is tender, then remove from the water, and allow to cool. Slice and serve, or refrigerate overnight and serve cold cuts the next day.